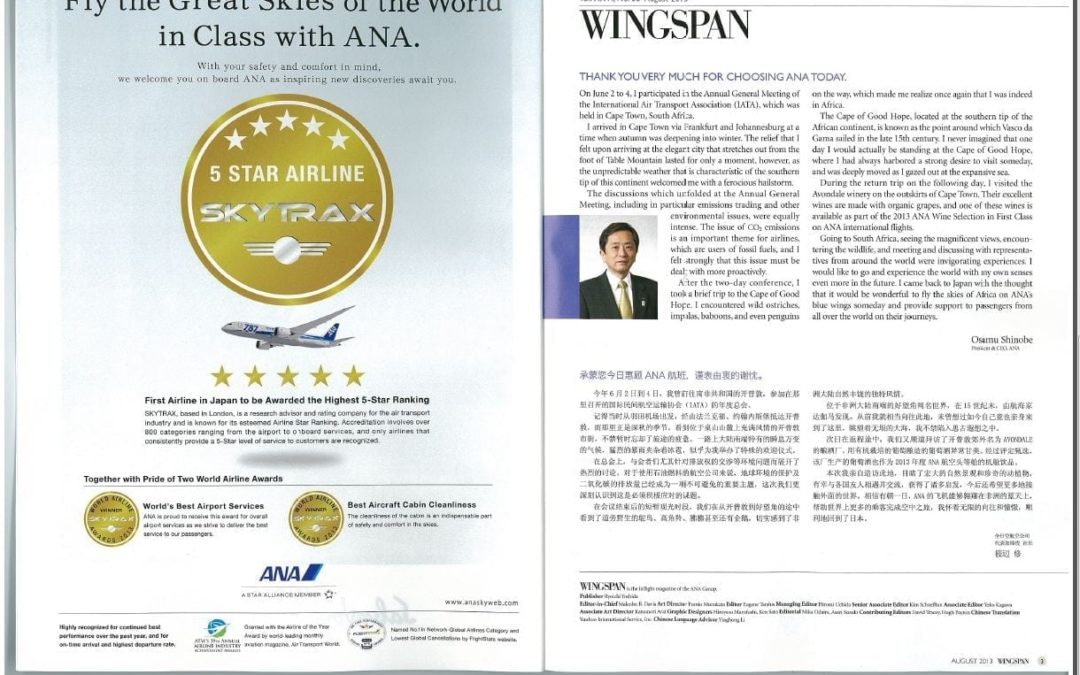 THANK YOU VERY MUCH FOR CHOOSING ANA TODAY.

On June 2 to 4, I participated in the Annual General meeting of the International Air Transport Association (IATA), which was held in Cape Town, South Africa.

I arrived in Cape Town via Frankfurt and Johannesburg at a time when autumn was deepening into winter. The relief that I felt upon arriving at the elegant city that stretches out from the foot of Table Mountain lasted for only a moment, however, as the unpredictable weather that is characteristic of the southern tip of this continent welcomed me with a ferocious hailstorm.

The discussions which unfolded at the Annual General Meeting, including in particular emissions trading and other environmental issues, were equally intense. The issue of CO2 emissions is an important theme for airlines, which are users of fossil fuels, and I felt strongly that this issue must be dealt with more proactively.

After the two-day conference, I took a brief trip to the Cape of Good Hope. I encountered wild ostriches, impalas, baboons, and even penguins on the way, which made me realize once again that I was indeed in Africa.

The Cape of Good Hope, located at the southern tip of the African continent, is known as the point around which Vasco da Gama sailed in the late 15th century. I never imagined that one day I would actually be standing at the Cape of Good Hope, where I had always harboured a strong desire to visit someday, and was deeply moved as I gazed out at the expansive sea.

During the return trip on the following day, I visited the Avondale winery on the outskirts of Cape Town. Their excellent wines are made with organic grapes, and one of these wines is available as part of the 2013 ANA Wine Selection in First Class on ANA international flights.

Going to South Africa, seeing the magnificent views, encountering the wildlife, and meeting and discussing with representatives from around the world were invigorating experiences. I would like to go and experience the world with my own senses even more in future. I came back to Japan with the thought that it would be wonderful to fly the skies of Africa on ANA’s blue wings someday and provide support to passengers from all over the world on their journeys.